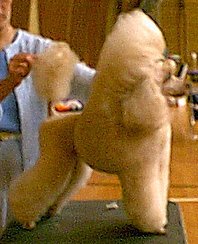 The History of The Poodle

In spite of the disagreement about the "homeland", there is an agreement that the Poodle has been used for hunting - especially as a waterretriever in duck hunting..

How the origin of the Poodle became we will never know but we know that it has been used for hunting, as a butcherdog and watchdog for many centuries.

The Standardpoodle is considered to be the oldest variant of the 4 sizes which is in Denmark today (Standard-, Miniature-, Dwarf- and Toypoodle)

It was the Standardpoodle who primary was used as a waterretriever. The reason to clip the coat with pompons on the legs was protection against the cold. The coat on the croup was cut of to reduce the water resistance so that the speed was increased. The tail got a pompon and there was tied a ribbon to the fringe so the hunter could see his poodle better in the dark water.

The Poodle has also been used to track truffles because of the good sense of smell.

Earlier the smaller poodle came which became very popular at the French Court in the 1800.

The Poodle in Denmark

Nobody knows when the poodle came to Denmark. But it was registered for the very first time in 1891 where the foundation of Danish Dogpedigree (Dansk Hundestambog) was.

I 1892 the first Dwarfpoodle gain her pedigree in the Danish Dogpedigree (Dansk Hundestambog). It was a white bitch born 1899 and her name was Bella. The sire was Basse and the dam was Bille. Breeder: Smed Erichsen, Odense, DK. Owner: Kgl. Vejer og Måler de Fine Olivarius, Odense, DK.

The first dog-exhibitions in Denmark was in 1886, 1888 og in Randers 1894. And it was here the first poodles participated.

Until 1966 the poodle was registered in 2 sizes: Standard- and Miniaturepoodles. At the exhibitions the Miniaturepoodles was divided into sizes so it was possible to give CAC for poodles up to 35 cm and under 35 cm.

In 1966 the name "Miniaturepoodle" was changed to Small Poodle and the measurement of poodles before the exhibition began so you were able to se which poodles belong to Miniaturepoodles and Dwarfpoodles.

Since 1979 all poodles were registered as you expect them to be: Standard, Miniature- or Dwarfpoodle. It was not allowed to breed between the different sizes but you could be granted an exemption to resize a small Miniaturepoodle to be Dwarfpoodle - and vice versa.

In 1988 Denmark got the 4th size - The Toypoodle which is a smaller size of the Dwarfpoodle. To make the standard size it is for a period allowed to breed between the sizes First time the Dwarfpoodle/Toypoodle will come to an exhibition after the poodle has been 1 year, the final size will be measured and registered. Until this first year the puppies will be registered as the same size as the mother.

The Size of The Poodle

For further information - please go to the Poodle Standard FCI

The Colours of The Poodle

Earlier you were able to register the colours Cafe-au-lait, Creme og Blue but it is not permitted any longer. Lately we are beginning to see more and more Cocker-red poodles that are registered as the colour apricot. But it is not allowed in Denmark right now.

For further information - please go to the Standard of the Poodle

Pudelklubben works together with The Danish Kennel Club and they take care of interest in the name of the poodle in Denmark. Pudelklubben's year of foundation was in 1948.

In the beginning together with the Collie-people but in 1951-52 the club was divided into 2 different clubs. The year of foundation is still 1948.

Pudelklubben arranges exhibitions, shows, obediense, agility and various arrangements around the country for the members.

Pudelklubben publishes the "Pudel Nyt" 5 times a year for all members. 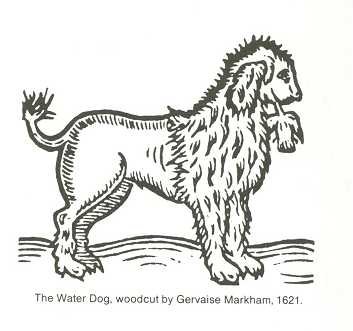 For information - please contact Anne Ørholt Nielsen in the Contact Formular or send me an e- mail: trophy@trophy.dk